Toronto’s popularity as an international tourist destination has made it the number one meeting city in the country. And, it continues to grow. So, too, does our hotel scene. Not only is the Six home to all the major chains, but it’s enjoying an influx of chic boutique hotels – each with its own brand of personality plus.

With the conference season upon us, and holiday parties afoot, here’s a look at what’s on offer among hotels that have opened their doors in the last year: 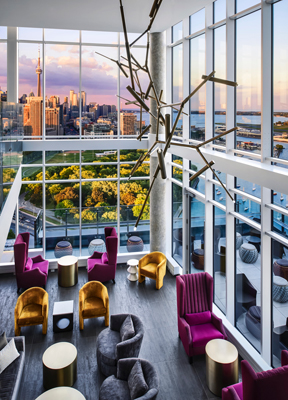 The Falcon SkyBar at Hotel X

Location: At 29 floors and 404-rooms, Hotel X, on the grounds of Exhibition Place, is now officially open.

The Rooms: The sprawling resort-like hotel lives up to its five-star accreditation in design and amenities. Pretty much every room enjoys a lake-front or city view. Handsomely appointed accommodation includes loft-style rooms and suites with generous living space. Unique is the ability to customize by linking several rooms, or combining different suites and living room parlours together.

Meet & Greet: A stone’s throw to both the Enercare Centre and the Beanfield Centre, it’s an ideal location for conference goers. There’s even a VIP check-in room for corporate groups. Several event floors house two ballrooms with balconies, the largest holds 450 guests, and 11 meeting rooms. Two landscaped outdoor event spaces can entertain up to 4,500 guests. The rooftop’s Falcon SkyBar is exquisite with the ability to host three simultaneous events.

On-site Extras: There’s not one but two theatres, the largest seating 250. There’s also a lobby art gallery showcasing the stunning photography of Neil Dankoff with more of his images spread throughout the hotel, an enormous athletic facility, and free shuttle service to Union Station and the island airport.

A Bit ’O Trivia: The archaeological digs that pre-empted the hotel’s construction unearthed the foundations of an 1840s Fort York barrack which is now on display under glass by one of the hotel’s entrances. 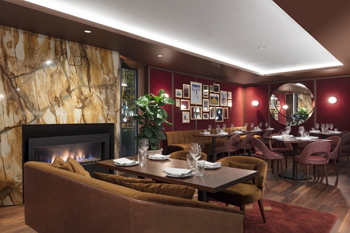 Location: With its sleek black exterior rising 11 stories up from Yonge and Bloor, The Anndore House Hotel offers 113 guest rooms, nine of which are suites, and a private meeting space.

Meet & Greet: Final details on the meeting space are still under wraps, however, plans note that its upper-level location will provide a view from an open-air terrace. There will also be two master suites with separate living space conducive to intimate in-room cocktail gatherings or brainstorm sessions.

On-site Perks: The hotel is home to one of the city’s hottest new restos, 145-seat Constantine Restaurant & Lounge with morning to night service showcasing Mediterranean flavours. Make inquiries into group and private bookings.

A Bit ’O Trivia: Most recently a Comfort Inn, The Anndore began life as a residence hotel in 1955 for business executives. In its heyday, it housed a famous jazz bar. 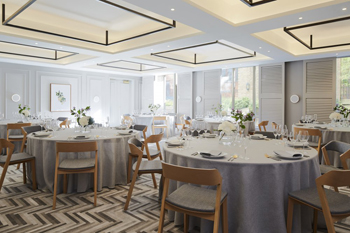 The Peregrine Room at the Kimpton Saint George

Location: Standing 14-stories tall on Bloor Street with 188-guest rooms, the Kimpton Saint George’s design approach tips its hat to its lively Annex neighbourhood, and the city, from the ground up.

Meet & Greet: Nestled in Bloor Street’s Culture Corridor, museums, attractions and shopping are just steps away. The Peregrine Room is a gorgeous ground-floor meeting space, bright and beautiful and furnished in a way that easily services boardroom pow-wows as well as intimate events for up to 100 guests. A striking pre-function area fronts the room. A “living room” lounge off the lobby hosts a daily wine hour for guests.

On-site Perks: Room-service and event catering is available from The Fortunate Fox, the hotel’s hip gastropub. Or hit the pub’s bar for post-meeting bevvies. Tour the neighbourhood on complimentary PUBLIC bikes.

A Bit ’O Trivia: The swank transformation from what once was Yorkville’s Holiday Inn, gives a chic and, often cheeky, nod to Toronto and the Annex ’hood, with a curation of locally sourced or commissioned furnishings, artwork and murals, including the owl by Torontonian street artist BirdO on the building’s exterior. 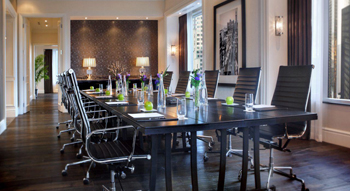 Location: What was the Trump Hotel & Tower is temporarily the Adelaide Hotel Toronto as the 65-storey tower in the heart of downtown undergoes a facelift, including introducing luxury design touches, sabering champagne in the lobby each evening and signature butler service, before flying the prestigious banner of the St. Regis Hotel Toronto, Canada’s first from the legendary name, now part of the Marriott Hotel collection.

The Rooms: There’s room to snooze in this hotel’s 258 guest rooms, the largest in the city starting at a generous 550-sq.-ft. All are luxuriously decorated. Suites – there are 124 of them — are laid out as small apartments with spectacular city views.

Meet & Greet: Host board meetings, training sessions, retreats or private dinners in one of three Executive Suites. Each space is self-contained with tastefully decorated, fully equipped function space; the largest holds 30 people. For large events and special occasions, the 9th and 10th floors offer several options including the opulently styled St. Regis Ballroom and the ornate Astor Ballroom, connected by a grand staircase. Both spaces are multi-functional and divide into three separate rooms.

On-site Perks: Add spa time into the event itinerary including private rental of the beauty and wellness space that resides on the 31st floor. There’s also the on-site dining or catering option of the Restaurant at The Adelaide Hotel

A Bit ’O Trivia: John Jacob Astor IV opened the first St. Regis New York in 1904, thought to be the most opulent hotel in the world at the time, with a daily room rate of $5/night. He named the hotel after Francis Regis, a 17th-century monk known for his hospitality to travelers, who was awarded sainthood in the 18th century. 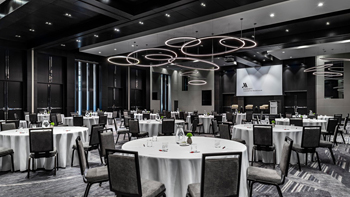 The Rooms: The 209 guest rooms, including 11 suites, are not only sleek, but also LEED-Silver certified for sustainability, with many overlooking the hotel’s green roof. Art and design is integrated throughout the hotel, including a revolving display of Canadian art pieces and photography drawn from the multi-million dollar collection of the Bratty family, owners of the real estate development firm behind the hotel’s development.

Meet & Greet: The hotel is designed for business travelers, with Next Gen Meeting Space tailored to foster collaboration. Located on one level, all six meeting rooms include a flexible set up, able to adapt to a variety of formats and group sizes. The Grand Ballroom is the largest, accommodating up to 400. Relax post-meeting in the Great Room, a signature lobby bar of Marriott Hotels, or dine in Draco, the on-site restaurant.

On-site Perks: In season, add an al fresco element to an event by reserving exclusive use of  two large outdoor terraces.

A Bit ’O Trivia: As a fast-growing tech hub, the hotel’s accommodation and meeting space is a welcome addition to Markham. Over 1,000 technology and life sciences firms, including IBM, Toshiba and GE Digital Energy, are based here, employing over 38,000 people – one-fifth of the city’s total workforce. 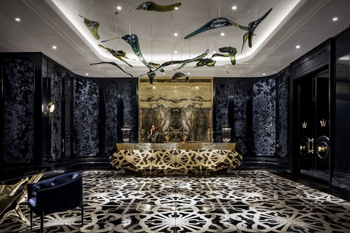 Location: Towering 44-floors above the Entertainment District, the Bisha Hotel Toronto is a wonderland of meet, play, dine and stay options.

The Rooms: Dramatic design flourishes, sultry lighting and colour palette set the tone in the black-marble lobby and continue throughout the 96 guest rooms that make up the eight-floor hotel portion of the towering condo building. An entire floor of jaw-dropping luxe rooms and suites designed by singer Lenny Kravitz adds to the hotel’s intended touch of celebrity. Of particular note: The Bisha Suite, a lavish two-level bedroom and living space with a private terrace and entertaining area, offers a lavish setting for intimate events.

Meet & Greet: The Salvador Room, the hotel’s official meeting space on the 43rd floor, makes for a stunning setting. The large area, with panoramic window views, is divisible into three with a capacity for 150. Private and semi-private gatherings can also be held at pool level in Kōst, a Baja Peninsula-inspired beach-house-in-the-city rooftop restaurant and patio. Akira Back, the hotel’s second-floor Japanese resto from its namesake Michelin-star chef, can seat events of up to 130 guests in a spectacular room of black carbon walls and a curvaceous water-colour painted ceiling.

On-site Perks: Cocktails by the rooftop’s infinity pool is a grand way to unwind from meetings, or stage a formal reception against the city backdrop. Rooms are named after famous artists — check out the bold art choices throughout

A Bit ’O Trivia:  Lenny Kravitz launched his design firm, Kravitz Design, in 2003. His portfolio includes work for many upscale brands, with projects ranging from wallpaper and furniture to hotel and apartment suites. 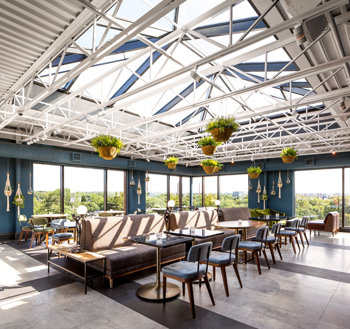 The Rooms: The bespoke guest rooms are designed to blend a boudoir-like elegance and modern aesthetic with each room featuring a unique accent or architectural detail inspired by the hotel’s past. There’s a record player and selection of vinyl in each room, and many offer cute outdoor terraces. Several rooms have the ability to connect to form a suite.

Meet & Greet: The Rooftop, on the seventh floor, is a city favourite for drinks and events. The glass-enclosed lounge and gathering space for 240 reception-style is crowned with a pyramid skylight and offers breathtaking city panoramas and a gorgeous terrace. Third-floor Lincoln Hall is a blank canvas with character and also has a terrace overlooking Riverdale. The space, which accommodates 150 seated, can be divided in half. For a more intimate, private setting, The Tower, seating 20, is a gorgeous room with a chandelier-filled vaulted ceiling and majestic windows.

On-site Perks:  All guests have free access to the hotel’s Lincoln Navigator — a luxury SUV with a driver to chauffeur them within a 5km radius of the area. There’s also semi-private dining for 14 available at The Civic, the hotel’s on-site restaurant, designed to embrace the hotel’s turn-of-the-century glamour. There’s also the more casual Café + Bar just off the lobby.

A Bit ’O Trivia: Built in 1891, the hotel, originally a commercial and social centre, was the tallest building east of the Don River at the time. It became The New Broadview Hotel in 1907, changing hands and names for the next century. Prior to its latest incarnation, it was home to Jilly’s, Toronto’s most notorious stripper club.