We love a good reinvention story. Especially when it comes to repurposing and revitalizing beautiful buildings, unique spaces and historical landmarks for event use.

In our industry, we see a lot of “reinvention” as hospitality entrepreneurs remake old sites into new venues and renovations breathe new life into existing locations.

Here’s a short list of ready-to-go event locations that have done an excellent job in recently repurposing or refurbishing a space: 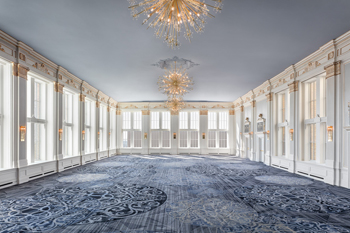 The Place: The Crystal Ballroom at the Omni King Edward Hotel

Then: Built in 1922 as part of the hotel’s expansion, the 17th-floor ballroom was “the” place for grand affairs.

Specifics: Revitalizing the room’s luxe glamour included refurbishing original finishings like the ornate wooden mouldings that crown the floor-to-ceiling windows that have a view to the lake and city. Updated wall sconces and spectacular gold and crystal chandeliers fill the room. Underfoot, a lovely blue carpet is reminiscent of early 1920s design. Beautiful new mosaic tiles and installation of a permanent bar refresh the pre-function space. A full on-site catering kitchen has also been added. Capacity is 300 including 60 on the orchestra balcony.

FYI: Costs of the ballroom reno exceeded the $6-milion it took to originally build The King Eddy in 1903. 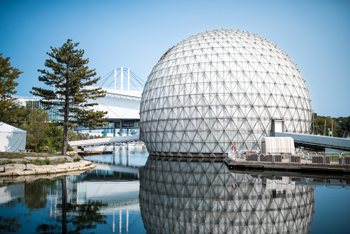 The Place: The Cinesphere at Ontario Place

Then: Opened in 1971, it was the world’s first permanent IMAX theatre.

Now: Closed in 2012, the colossal white golf ball by the lake has been updated and is back in action with public showings and private events.

Specifics: The latest 60- x 80-ft. curved IMAX screen now presides over the 91-ft.-tall domed interior, upgrading screening capabilities of both IMAX 70 mm (9x the resolution than 35 mm film) and to the next-generation technology, IMAX-with-laser. A sound system overhaul provides a new state-of-the-art immersive audio experience. The iconic theatre seats 614, 527 of which double as 3D-screening chairs. Improvements have also been made to the lobby, lighting and acoustics. The lobby, which sits at the end of the glass-enclosed bridge walkway entrance, hosted the theatre’s re-opening cocktail reception. Capacity: 150. A new private events package is in the works with details to be released soon.

FYI: In 2014, Cinesphere was designated a structure of cultural heritage value. 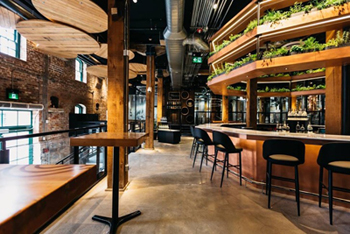 Then: The site was the original malting house for the Gooderham and Worts distillery circa the 1860s.

Now: Home to one retail space or another since the historical district opened in 2003, the space is back in action as a boutique distillery for small-batch vodka and gin.

Specifics: Maintaining the distinctive architecture of the area, exposed brick and original rustic wood beams line the space. Fabulous is the unique entranceway chandelier fashioned from the company’s crystal-like custom bottles. The 2,500-sq.-ft. tasting lounge offers a large centre bar with optimal views of the glassed-in room housing impressive looking distillation equipment. There’s also a bitters bar where guests can learn to make their own bitters. Other interactive event add-ons include group tastings, cocktail workshops and a hands-on day with a distiller to acquire the secrets to crafting premium spirits. The space accommodates receptions of up to 150 and is fully customizable. Buyout is available.

FYI: There are five catacombs located beneath the distillery, one of which is visible from the main staircase. 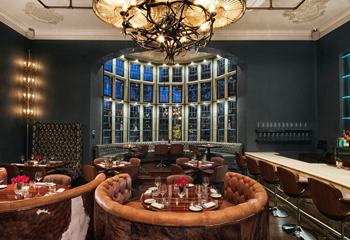 Then: Completed in 1914 as the palatial residence for financier Sir Henry Mill Pellatt, Toronto’s iconic castle has been a tourist attraction mainstay for decades.

Now: Still a popular must-visit museum and event venue, Liberty Entertainment Group took over management in 2014 transforming the site into an entertainment complex with unique amenities like an escape room game series, an outdoor event pavilion and, most recently, BlueBlood Steakhouse.

Specifics: Located in a main-floor wing of the castle, the refined steakhouse is opulent. The setting is a marvellously cheeky mix of the historic venue’s classic architecture and antiques with design-edgy pops of contemporary art from street artist Mr. Brainwash, Andy Warhol and Salvador Dali. Two stately pink marble lions greet guests at the restaurant’s private entrance. Striking antler chandeliers hang above the plush leather banquettes that fill the 130-seat dining room. There’s also a cigar-lounge bar. Ideal for small group dinners, the menu is splurge-worthy with items like a Wagyu filet tasting plate, aged premium cuts and seafood towers.

FYI: Drake gave the resto a celebrity-approval rating by recently hosting his 31st birthday there. 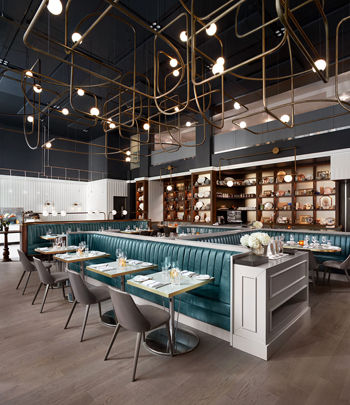 Then: The restaurant has undergone a couple of updates since the boutique hotel, one of the city’s first, opened its doors in 2003.

FYI: Take a casual East-Coast approach to entertaining by hosting a private “kitchen party” for up to 25 guests with a family-style meal served in the intimacy of Café Victor. 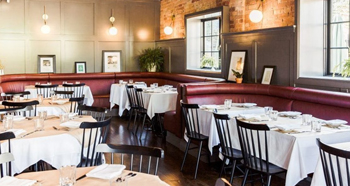 Then: The circa 1910 building operated as the Hotel Maple Leaf until 1975 before gaining notoriety as a divey east-end bar that operated until 2011.

Now: Under new ownership and a three-year renovation, the Maple Leaf Tavern reopened in 2016 as a North American tavern and urban eatery to rave reviews.

Specifics: Resplendent in dark polished wood, original exposed brick and elegant accents, there’s a 45-seat dining area with linen-dressed tables and gorgeous banquettes and a spacious lounge with high-tops and booths wrapping either side of the horseshoe-shaped bar. The talented kitchen team sends out elevated tavern fare, refined American classics paired with impressive taps, wines and cocktails. An eight-seat chef’s counter lets diners watch the culinary action. Downstairs, a private room with A/V seats 16. Future renovations will see the lower level expand into a casual, upscale sports lounge and private event space. Buyout is available with a total capacity of over 200.

FYI: History remains: The original tavern’s signage hangs in the side patio, an old cigarette machine remains in the entranceway, and stained glass from the building’s façade now sits pretty in the transom above the open kitchen. 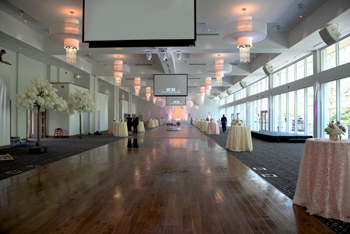 The Place: The Guild Inn Estate at Guild Park and Gardens

Then: The inn began life as the Bickford residence in 1914, growing in size and accommodation over the years as the surrounding park became an artist colony and lakeside retreat. The inn was shuttered in 2001.

Specifics: Surrounded by lush, historical parkland, the new contemporary banquet centre integrates beautifully with the restoration of the original 1914 building that’s now the restaurant. The spacious new event space, an elegant blank canvas, can host several simultaneous functions thanks to dividers that section the pillar-free ballroom into five rooms. Twenty-foot floor-to-ceiling windows run the length of the venue for tons of natural light and picture-perfect framing of the walk-out terrace and park backdrop. Capacity is 1,000 seated and 2,000 standing. A sheltered outdoor ceremony/reception space can seat up to 500. Events can also entertain in the Bickford Bistro, lovely with its original wainscoting and fireplaces. The bistro accommodates 60-seated with four bridal suites upstairs for pre-event preparations.

FYI: The new venue was specifically designed with sightlines and accessibility to the property’s landscaped 88-acre park which is home to architectural artifacts salvaged over the years from historic Toronto buildings slated for demolition.

Then: Launched in 1987 as The Corporate Seminar Centre, it was one of the city’s first independent purpose-built meeting and training rental facilities, with a location move to its current address and a name change to St. Andrew’s Club & Conference Centre in 2001.

Now:  A new website and recent rebrand to Vantage Venues better reflect the breathtaking views and meeting-to-special event capabilities of its 40,000-sq.-ft. space on the 16th and 27th floors of the Sun Life Financial Centre on King St. West.

Specifics: Room capacities range in size from an intimate sit down for six to a gala reception for 300. Maximum for a seated event is 225 theatre style. There are over 25 different room and lounge combinations plus 13 breakout meeting options. The larger spaces are a blank canvas for customizing to purpose and event décor. Each floor is served by its own dedicated on-site kitchen. Full-service AV and an in-house event planning team make hosting easy.

FYI: Celebrating its 30th anniversary, Vantage Venues is a family-run enterprise with founder and CEO Stephen Hodd, and son, managing director Andrew Hodd, continually evolving the business and space with the times.