Just in time for Halloween, Escape Manor opens the doors on its Toronto flagship space in the heart of the Entertainment District, signalling that escape rooms aren’t just a fad … they’re a sought-after recreational activity. Its tagline reads “Drinks. Axes. Escapes.” Those three words barely scratch the surface of what’s in store at this multi-storey immersive entertainment lounge. Guests start their adventure in The Lounge with cocktails, beer, light bites and “warm-up” games, like a handcuff escape, a blind-folded sound experience, mystery boxes, board games, cocktail roulette, and more. 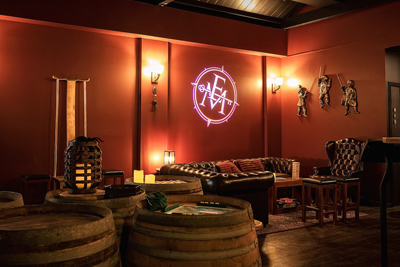 Teambuilding is a massive part of Escape Manor’s business. The facility’s four escape rooms (a fifth is in the works), have names like The Asylum and Death Row. Designed around provocative storylines and suspenseful, often scary, movie-set like settings, the rooms force people to work together to beat the clock and achieve the common goal of escaping a twisted fate. Corporate coaches facilitate post-escape seminars analyzing each group’s performance and how it ties back to a company’s value proposition. Each room accommodates groups of two to eight, or up to 32 using all four rooms. There’s also an eight-lane axe-throwing zone with a capacity of up to 48 people. Total buy-out of Escape Manor accommodates groups of up to 200.